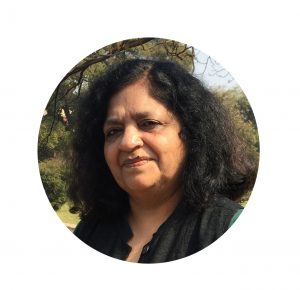 Born and brought up in Kenya, Sukrita Paul Kumar is a well-known poet and a critic. She held Aruna Asaf Ali Chair at Delhi University till recently. Formerly a Fellow at the Indian Institute of Advanced Study, Shimla, she is at present an Honorary Fellow of International Writing Programme, University of Iowa, USA, Fellow of Cambridge Seminars and Hong Kong Baptist University, Centre for Developing Countries, Delhi University as well as Faculty, Durrell Centre at Corfu, Greece. She has published several collections of poems, Dream Catcher, Untitled, Oscillations, Apurna, Folds of Silence, Without Margins, Rowing Together and Poems Come Home (Two bilingual books, the original English poems alongside their Hindustani translations by the eminent lyricist Gulzar and the Hindi poet, Savita Singh). Her poems have been published in many journals and anthologies in India and abroad. She has been an invited poet at many international literary festivals including Vietnam, Bhutan, Kenya, Spain, England and USA etc.

Her major critical publications include her books, Narrating Partition, Conversations on Modernism, The New Story and Man, Woman and Androgyny. She was Director of Katha’s Project on “Translating Short Fiction” for two years. Her edited volume, Ismat, Her Life, Her Times was published by Katha in 2001. In Hindi, her co-edited book Ismat Aapa has been published by Vani Prakashan. As Director of a UNESCO project on “The Culture of Peace”, she edited a volume of Urdu short stories from India and Pakistan, Mapping Memories in English and Bazdeed in Urdu. She has co-edited Speaking for Herself: An Anthology of Asian Women’s Writing (Penguin India), Women’s Studies in India: Contours of Change (IIAS, Shimla). The National Book Trust of India published her translations, Stories of Joginder Paul and Katha published her translation of his Partition novel, Sleepwalkers. She is the chief editor of the anthology prescribed by University of Delhi on “Cultural Diversity and Literary Traditions in India” (Macmillan India, now reprinted by OUP, Delhi). Also, Pearson Longman published Interpreting Homes in South Asian Literature, co-edited by her. “Crossing Over”, a special issue on Partition, of Manoa, the journal from University of Hawaii (Summer 2007), was guest-edited by her. In her co-edited book Chamba-Achamba: Women’s Oral Narratives she translated nearly 75 Chamba songs into English. She is at present engaged with a major project on “Cultural Diversity in South Asia” as part of which she also convened an International Seminar on the subject. Her papers on “Cultural Diversity in South Asia” have been published in international journals. She has been the academic coordinator and presenter of three IGNOU films on “Partition through the eyes of the Writer”. Her latest book is Blind (HarperCollins), an Urdu novel translated by her into English.

Sukrita was an invited poet at the prestigious three-month-long International Writing Programme, at Iowa, USA. She was also invited by the Hong Kong Baptist University for a residency. She has been a recipient of several grants and fellowships including a translation grant from International Center for Writing and Translation, University of California at Irvine, Rockefeller grant for an academic visit to New York State University, the British Council Visitorship and Charles Wallace sponsorship for a seminar in Cambridge University. She is also an awardee of the Shastri Indo-Canadian Research Fellowship. She has lectured at Cambridge University, SOAS (London University) and several Canadian and American Universities on Indian literature. At the South Asia Institute at Heidelberg, Germany, she lectured on Partition Narratives. She has given readings of her poems at various universities and institutions abroad. A nominated member of the Executive at India International Centre, Delhi, she has been involved in the conceptualization of many cultural and intellectual activities over many years. Her poems have been translated into many languages in India and abroad.

Committed to serving social causes, she set up a shelter for the homeless a few years ago. The poems that came out of her experiences with the homeless were presented at Nehru Centre at London.

Sukrita has held solo exhibitions of her paintings, many of which have also been published in journals and books.