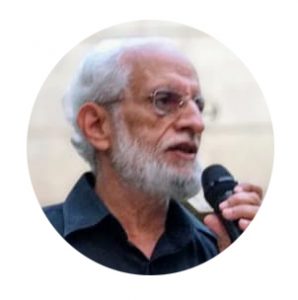 Alok Bhalla, a retired professor of English, got his M.A from St. Stephen’s College, Delhi and Ph.D from Kent State University, USA. He has been a Professor/Fellow at the English and Foreign Languages University, Hyderabad, Hebrew University, Jerusalem, Jamia Millia Islamia and Ambedkar University, Delhi, Institutes of Advance Study at Nantes (France), Bellagio (Italy), Shimla, and Gandhiji’s Sabarmati Ashram, Ahmadabad. A critic, translator and poet he has published extensively. His books include Stories About the Partition of India (4 volumes), Partition Dialogues, Ramakatha: Narrative, Performance, and Pictorial traditions (co-edited), Politics of Atrocity and Lust (on the Vampire Tale), Shades of the Preternatural (on the Gothic Novel). The Life and Times of Saadat Hassan Manto etc. His recent translations include Dharamvir Bharati’s, Andha Yug, Nirmal Verma’s Dark Dispatches, Intizar Husain’s Story is a Vagabond (co-edited) and A Chronicle of the Peacocks, and plays by Bhisham Sahni, Krishna Baldev Vaid etc. His articles have appeared in Journal of Peasant Studies, Comparative Literature Studies, Manoa, Annual of Urdu Studies, etc. His collection of poems for children is entitled, Wild Verses of Wit and Whimsy (illustrated by Manjula Padmanabhan). He was elected as the Chairperson of its English Board of the Sahitya Akademi.