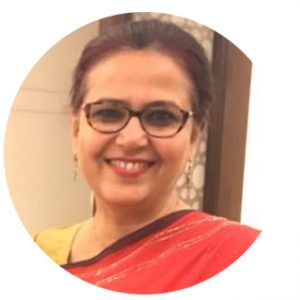 Dr Rakhshanda Jalil is a writer, critic and literary historian. She has published over 15 books and written over 50 academic papers and essays. She has edited four collections of short stories: Urdu Stories (Srishti, 2002), a selection by Pakistani women writers called Neither Night Nor Day (Harper Collins, 2007), New Urdu Writings: From India and Pakistan (Westland, 2013), and Pigeons of the Dome: Stories of Communalism (Niyogi Books, 2015); a collection of essays on the little known monuments of Delhi, called Invisible City (Niyogi, 2008, revised third edition 2011); two co-authored books, Partners in Freedom: Jamia Millia Islamia (Niyogi, 2006) and Journey to a Holy Land: A Pilgrim’s Diary (OUP, 2009). She was co-editor of Third Frame, a journal devoted to literature, culture and society brought out by the Cambridge University Press. She has edited and introduced a volume of essays entitled Qurratulain Hyder and the River of Fire: The Meaning, Scope and Significance of her Legacy (Aakar, 2010; and Oxford University Press, Karachi, 2010).

She has published ten works of translations: Premchand’s short stories entitled The Temple and the Mosque (Harper Collins, 1992; revised and enlarged 2011); a collection of satirical writing in Hindi by Asghar Wajahat entitled Lies: Half Told (Srishti, 2002); 32 satirical cameos by Saadat Hasan Manto entitled Black Borders (Rupa & Co., 2003); Through the Closed Doorway, nazms by Urdu poet Shahryar (Rupa & Co. 2004); short stories by Intizar Husain entitled Circle and Other Stories (Rupa & Co. 2004; Sang-e-Meel, Lahore, 2012); a collection of Premchand’s short stories for children called A Winter’s Tale and Other Stories (Puffin, 2007); Naked Voices and other Stories – a collection of stories and sketches by Saadat Hasan Manto translated by her from Urdu (Roli, 2008); and Panchlight and Other Stories by Hindi writer Phanishwarnath Renu (Orient Blackswan, 2010). Her translations of 15 short stories by Intizar Husain The Death of Sheherzad (Harper Collins, 2014) was shortlisted for the Crossword Award; and her translation of Intizar Husain’s seminal novel Aage Samandar Hai, as The Sea Lies Ahead, for Harper Collins  won the German Embassy-Karachi Litfest Pakistan Peace Prize in 2016 and the Runners-Up and Jury’s Commendation for the Muse India Translation Award 2017.

She runs an organization called Hindustani Awaaz, devoted to the popularization of Hindi-Urdu literature and culture and had curated a day-long celebration of the literary culture of Urdu, entitled Afreen, Afreen.

Her Ph. D. on the ‘Progressive Writers’ Movement as Reflected in Urdu Literature’ was published by Oxford University Press as Liking Progress, Loving Change. Another book, a biography of Urdu feminist writer Dr Rashid Jahan, has been published by Women Unlimited as A Rebel and Her Cause (2014, and also published by Oxford University Press, Karachi). With over 20 books behind her and over 50 academic papers at seminars and conferences, at present she contributes regularly to national and international newspapers and magazines, writing book reviews, opinion pieces and travelogues. She also contributes regularly to Himal (Kathmandu), The Herald (Karachi) and The Friday Times (Lahore), apart from the Indian Express, The Hindu, Biblio, The Literary Review, The Wire, Scroll, Firstpost, Outlook, etc. in India. Her debut collection of fiction, Release & Other Stories, was published by Harper Collins (India, 2011), and received critical acclaim.

Her most recent books include: Looking Back: The 1947 Partition of India,70 Years On, co-edited with Tarun K. Saint and Debjani Sengupta (Oxford Blackswan, 2017); Footprints on the Zero Line: Writings on the Partition, translation of short stories and poems by Gulzar (Harper Collins, 2017); The Traitor, a translation of Krishan Chandar’s novel Ghaddar(Westland/Amazon, 2017); and An Uncivil Woman: Writings on Ismat Chughtai (Oxford University Press, 2017). At present, she is writing a critical biography of the Urdu poet Shahryar.

She was given the Kaifi Azmi Award for her contribution to Urdu Literature in 2016 and the First Jawad Memorial Urdu-English Translation Award in 2017. She is a Trustee of the Ghalib Institute, Delhi, the Sarvodaya International (Delhi Chapter), PEN (Delhi Chapter); she also serves on the Board of the annual Shankar-Shad Mushaira organized by the DCM Shriram Group.