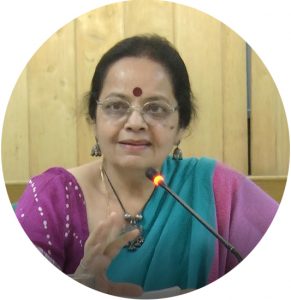 Guru Prerana Shrimali a senior dancer of the Jaipur gharana of Kathak, received her training in dance from Guru Shri Kundanlal Gangani.

Having mastered the complexities of the Jaipur style with her grace, innovativeness and imagination, she ranks amongst the most illustrious and reputed classical dancers of India today.

Equally competent in pure dance (nritta) and abhinaya (expression), Guru Shrimali has endeavoured to expand her Kathak repertoire by choreographing new and highly acclaimed compositions based on poetry, ancient, medieval, and modern; and by exploring verses of Kalidas, Amaru, Meera, Kabir, Padmakar, Ghalib, the French poet Yves Bonnefoy, and others.

She fuses lyricism in virtuosity, blends expressiveness with new insights, invents new gestures, and intensifies her abhinaya with subtle imagination. She firmly believes in the open-ended possibilities that Kathak offers, particularly of new and complex experiments within the tradition, and also believes that experiments must not be ephemeral but should survive in tradition itself.

Widely travelled both in India and abroad, she has been featured in all the major dance festivals in India, such as at Khajuraho and in many international festivals, such as Festival D’Avignon, France.

She taught Kathak in Delhi for many years; has written on ‘Kathak and Abstraction’ for which she got a Senior Fellowship from the Government of India; and has worked as the Repertory Chief of Kathak Kendra, Delhi, for two years and was also guru there from 2012 to 2017.

Guru Prerana Shrimali lives and works in Delhi. She teaches kathak and her compositions on Kabir, Bhumi and Saptavart have received wide acclaim. She is a poet at heart and writes poetry only for her own self. ​