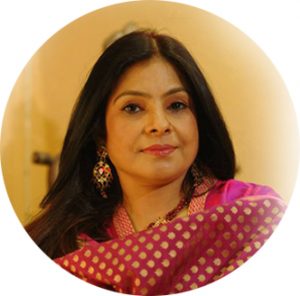 Padma Shri Malini Awasthi (born 11 February 1967) is  a torchbearer of India’s rich folk and classical musical traditions. She sings in Hindi dialects such as Awadhi, Bundelkhandi and Bhojpuri.

A post graduate in Hindustani classical music from Bhatkhande University, Lucknow, she is a Ganda bandh student of Legendary Hindustani Classical Singer, Padma Vibhushan Vidushi Girija Devi of Banaras Gharana.  Her first guru was Ustad Shujat Hussain of the Rampur gharana. Trained in Gorakhpur under Ustad Rahat Ali Khan who diversified her knowledge in Indian semi-classical and light music, she is an established artist at All India Radio, Doordarshan, Sangeet Natak Akademi and the ICCR. She has performed at several television shows and in countries across the world and her vast repertoire includes thumri, dadra, hori, chaiti, ritu geet, Sufiyana kalaam and various other traditional music forms from Avadh and Banaras.  She is passionate about preserving India’s considerable oral musical excellence. A popular Folk Diva and a Face of Cultural Heritage of India, she has helped revive the oral traditions of Kajri and her work has lent her voice to the perishing languages.