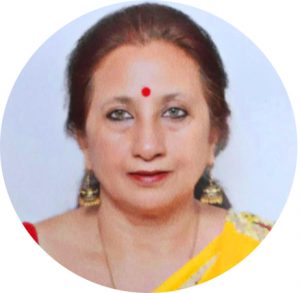 Dr. Babli Moitra Saraf is the Principal of Indraprastha College and an Associate Professor in the Department of English. She heads the Department of Multi Media and Mass Communication. She has an M.Phil in English and PhD in Sociology. Her doctoral thesis studies language change in the advertising industry in India in the first phase of globalization (1984-94), and the emergence of the Indian urban middle class identity. She is fluent in several Indian and foreign languages. Active as a teacher both within and outside her College, her teaching interests include Translation, Poetry, Modern Indian Literature in Translation, Classical Literature, Renaissance and Modern European Drama, Poetry, The Bible, Cultural Studies, Communication Studies, Literary Theory, Literature and the Arts and the Hindi Film Song.

Her ongoing research examines traditions of Orality, Embodied Languages and Performance in the context of Translation and Translation Studies. The two publications, La Cattura (Theoria, 1996) and La Preda e altri Racconti (Einaudi, 2004), are translations from the Bengali activist-novelist Mahasweta Devi’s works into Italian in collaboration with Maria Federica Oddera. Her work Rajouri Remembered (2007), is a translation of a family narrative, from Hindi, Urdu and oral Punjabi, which recounts the effects of the Partition of India in the state of Jammu and Kashmir. She has co-edited with Shormishtha Panja Performing Shakespeare in India: Exploring Indianness, Literatures and Cultures (New Delhi: Sage, 2016). Her latest publication is Hey Diddle Diddle: Tun-Tun Tara-Tara (New Delhi: Vani Prakashan, 2017), which are Hindi adaptations/translations of popular nursery rhymes in English. She has published articles in the field of Translating and Interpreting Studies and is on the editorial board of several journals.

Dr. Moitra Saraf is an Indo-Italian Cultural Exchange scholar, and was a Research Associate and Visiting Faculty at the NIDA School of Translation Studies, Italy. She received the Distinguished Teacher Award of DU in 2009, the Amity Women Achiever in Education Award in 2010,  the 27th Dr. S. Radhakrishnan Memorial National Award for Teachers in 2011 and has been a Fulbright- Nehru International Education Administrator Seminar Program Fellow. She is a “Distinguished Alumnus” of St. Stephens College, and was awarded the “Women of the Decade in Academia”, by the Women Economic Forum in 2017 and the Certificate of Felicitation of the International Women’s Club, for “Remarkable Contribution in the Field of Administration & Education for Girls”, in 2017. In 2018 she received the “Girl Centric Tertiary Education and Training” award from the Women’s Agency for Generating Employment (WAGE), New Delhi.